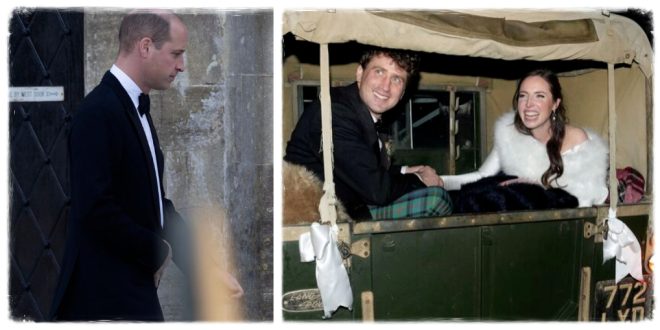 Prince William Attends The Wedding Of His Former Girlfriend

Prince William has been seen attending the wedding of his former sweetheart Rose Farquhar today. Ms Farquhar is marrying George Gemmell at St Mary the Virgin in Gloucestershire in a Christmas-time wedding. The pair previously dated in the months after a young William left Eton.

They had been childhood friends for years and started to date during university.

However, the pair ended on amicable terms and have remained good friends to this day.

After their brief relationship, Rose moved to New York to study acting at the Lee Strasberg Institute.

READ MORE: All Of Princess Catherine’s Best Photos From 2022

The news of the wedding was announced in September this year.

She is the daughter of Captain Ian Farquhar, former Master of the Beaufort Hunt, who delighted in the news of her marriage to Mr Gemmell.

He told the Daily Mail at the time of the announcement: “He could not be a more charming son-in-law for the future.

“The Gemmells have been friends of ours for years. We’re absolutely delighted.”

The groom, who is currently completing his veterinary studies, is the stepson of the late Barbadian construction tycoon Sir Charles Williams, who died last year.

Ms Farquhar made it on TV screens around the world when she entered the talent contest The Voice.

The singer-songwriter auditioned in 2016 with ‘Anyone Who Had a Heart,’ but none of the celebrity judges chose her for their teams.

READ MORE: Sweet Kisses For King Charles And Camilla From George And Charlotte

The couple met at the University of St Andrews in Scotland in 2001, where she was studying art history.

However, it was not until 2003 that the pair started dating.

The couple later married in Westminster Abbey on 29 April 2011, with around 300 million people tuning into the televised wedding.